Western Australia boasts an amazing lineup of spectacular natural events and attractions, many of which are only found in a handful of locations on Earth. Regularly occurring at particular times or seasons of the year, they offer unique opportunities for visitors to be touched by nature. 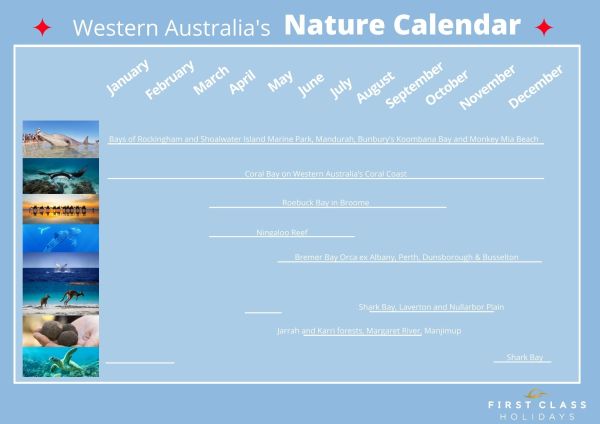 Between May and December, humpback, southern right and blue whales make their way along WA’s coast, often coming so close to shore with their calves you can see them with binoculars or the naked eye from coastal vantage points. Between January and March, an expedition to the marine-life hotspot of Bremer Bay Canyon will bring magical encounters with Southern Hemisphere’s largest pod of killer whales (orcas).

The largest floral show on earth

The wildflower collection in Western Australia is the largest on Earth. With more than 12,000 species, over 60% of which are found nowhere else on Earth, they colour the landscapes from coast to forest and city to outback.

Up close encounters with dolphins are never far away 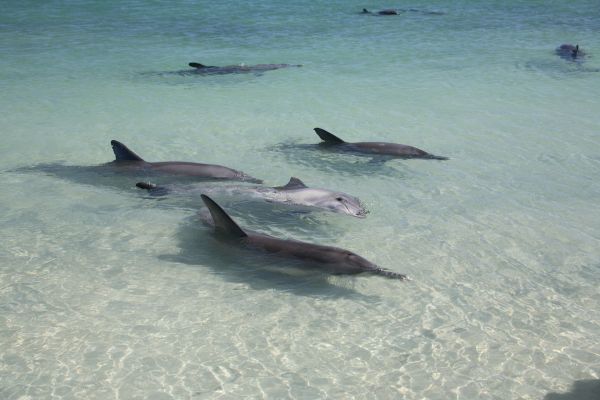 While bottlenose dolphins can be found all along the coastline, all year round, there are four main destinations where you’re more likely to have a dolphin interaction: the protected bays of Rockingham and Shoalwater Island Marine Park, the spectacular waterways of Mandurah, Bunbury Dolphin Discovery Centre in Bunbury’s Koombana Bay, and the turquoise shallows of Monkey Mia Beach.

Whale sharks can grow up to an astonishing 16 metres long and weigh 30 tonnes or more. Between March and July, they spend their days basking along the reef and feeding on fattened krill, giving divers and snorkellers the extraordinary thrill of swimming alongside these magnificent creatures. Many describe it as a humbling and life-changing experience.

Witness Staircase to the Moon from March to October

Between March and October each year, when conditions are just right, visitors to the North West region are treated to a natural spectacle - the Staircase to the Moon. This natural phenomenon is best seen from Roebuck Bay in Broome, when the full moon rises over the exposed mudflats at extremely low tide and creates a beautiful optical illusion of stairs reaching to the moon.

Watch seals and sea lions play all year round.

It's easy to watch these furry mammals for hours as they cavort among the waves or honk their way across the beach, without a care in the world. The Australian Sea Lion is the world's rarest, yet can be found in the protected waters of the Shoalwater Marine Park, just outside Perth.

Spot turtles from December to February

The World Heritage Listed Ningaloo Reef is also home to several species of turtle, which breed each year along the reef and beaches. Between December and February, Green, Loggerhead, Hawksbill and Flatback turtles mate before dragging themselves ashore to lay eggs and write another chapter in nature's fascinating epic.

Swim with Manta Rays all year round 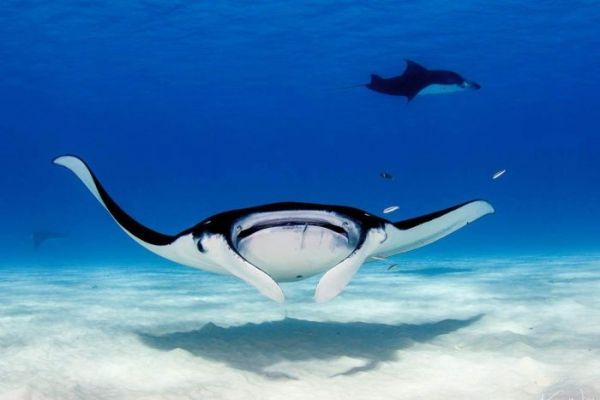 You can swim with manta rays all year round at Coral Bay on Western Australia’s Coral Coast. Like whale sharks, manta rays are filter feeders and have a large toothless mouth which they use like a sieve to scoop up plankton and krill.

See the migratory birds in spring 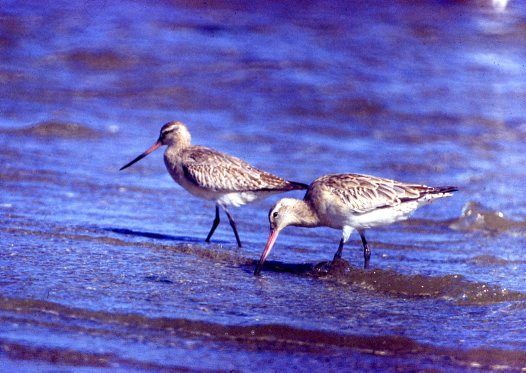 In spring, the clear, blue skies of Western Australia are peppered with the flocks of migratory birds making their way around the State. Throughout the day, visitors are treated to familiar patterns of restless birds migrating towards the horizon in graceful 'V' formations.

Nestled between the mighty Jarrah and Karri forests east of Margaret River, lies the fertile stretches of Manjimup. The richness of the soils and the cool climate here are ideally suited to growing premium grapes and black truffles, similar to those in renowned truffle destinations in France and New Zealand.

The Australian truffle season runs from June to September with an annual event held in Manjimup to kick it off.  The popular event brings people together from all over the world to showcase the region's export-quality rare black winter truffles (also known as Tuber Melanosporum).

If this has tempted you to visit Western Australia, contact our experts on 0161 888 5632 for a free no obligation quote.

Alternatively, request a copy of our Australia brochure here.