There's so much to see in South Africa. From Kruger National Park, viewing Big 5 game, to Table Mountain.

Find out everything you need to know before you travel including language, money, the latest government advice and more.

Be inspired by our range of itineraries in our South Africa brochure. We can personalise any element of your trip to how you want it. 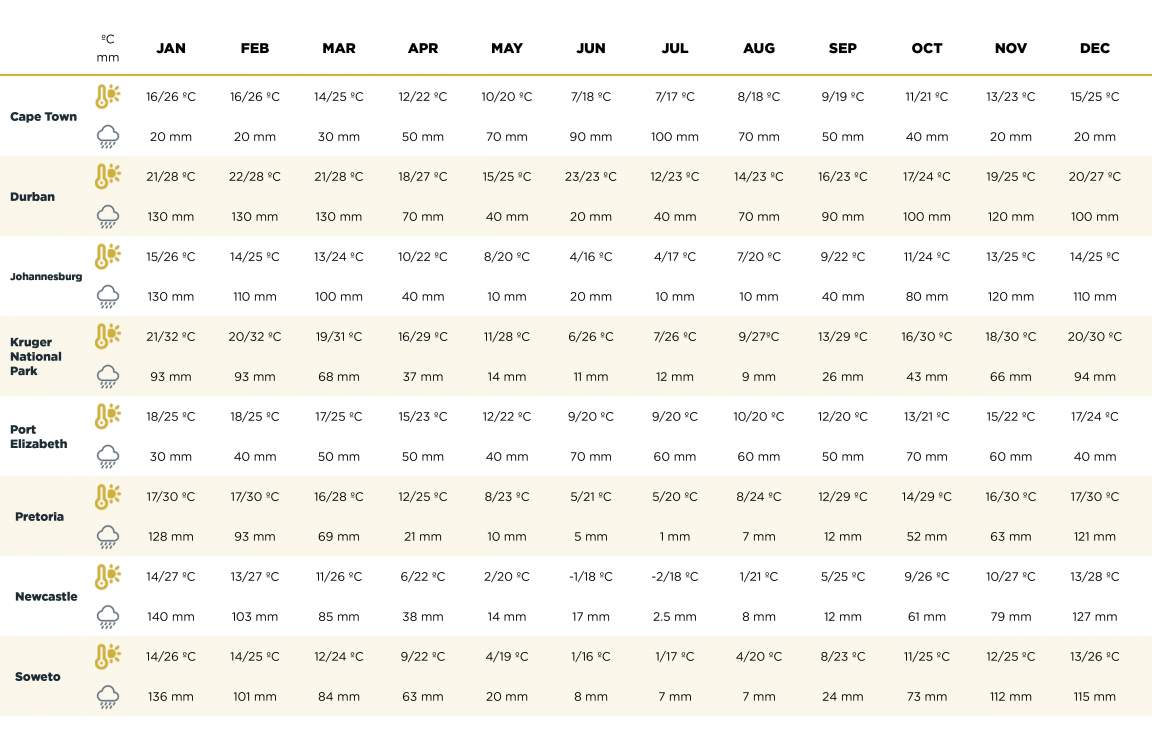 When to visit South Africa:

While South Africa is a year-round destination, it's well worth understanding the country's seasonal weather patterns, as well as knowing which time of the year best suits the activities you would like to enjoy.

Wildlife/safari – May to October. This tends to be the dry season, making wildlife viewing easier because there is less vegetation and the animals tend to group at waterholes. Due to there being little to no rain, it also means there are fewer mosquitoes. Morning and evening game drives can be a little chillier, though, so remind your clients to take warm clothes.

Birding – September to March. With more than 800 bird species, of which around 130 are endemic, South Africa really is an ornithologist’s dream. The peak viewing period is December and January, when visitors could possibly spot a few hundred species in a single trip.

Whale watching – June to November. Southern right whales are highly visible along the Cape south coast. You don’t even have to go out on a boat to see them because Hermanus, overlooking Walker Bay, is considered to be the best land-based whale-watching spot in the world. Although the southern right whales’ spectacular displays usually steal the limelight, there’s also a good chance of seeing humpback, minke, Bryde’s and even killer whales.

Namaqualand flowers – August to September. This is a very dry area, and winter rains from May stimulate the growth of what eventually becomes a carpet of colourful wild flowers. The flower season peaks in August through to late September, depending on when the rains arrive.

Winelands harvest – February to April. This is the time to visit the Winelands if your clients are interested in seeing the harvest and the process of making the wine. Most wine towns will have harvest festivals over this period, with more and more wine estates jostling for attention.

Sardine run – May to July. Millions of sardines travel north from the colder seas, up the coast of the Eastern Cape and KwaZulu-Natal. This natural phenomenon is visible even by satellite, as from the sardine shoal stretches up to 15km in length and 3.5km in width. This really is a wildlife lover’s dream as the sardines bring with them predators – seabirds, dolphins, sharks, whales and even big game fish – all taking participating in a mass feeding frenzy